Hip Hop producer/ emcee Bastian Bucks reaches out from the underground this June with the announcement of his new single ‘Revenge’ and subsequent album release on the horizon for 2017. The independent artist, hailing from Melbourne, is ready to deliver on what looks to be a new dawn of progression in Australian Hip Hop.

Stepping away from the traditional styling’s and success of his Australian counterparts, Bastian Bucks pushes the boundaries of creativity to no end. Leaving a crack in the foundation of what is considered to be popular music. Turning pre conceptions of the Hip Hop specific genre on their head, Bastian Bucks embodies a new era in Australian music.

‘Revenge’ will be available for download/ streaming via Triple J Unearthed and Bandcamp Thursday June 1st.

Well here it is people!

Feels good to share this with the world. I thank you for your patience, and persistence in supporting me for all this time. After months of work we have finally reached the release! And thankfully everything worked out. Now I may not be able to explain myself or my thoughts very well in real life but I think I just hit a note with this album.

And we also got an awesome review from the folks over at HipHop.Melbourne which you check out HERE. For CD purchases follow the bandcamp link. For digital downloads/ streaming head to your preferred online store from the list below. CD’s are going quick but I am in the process of ordering more.

It’s an honour to share this with you all and thank you for your support!

Hip Hop artist Bastian Killjoy has set upon a new journey this year with the announcement of his 4th full length album release ‘Golly Gosh’, due for arrival on July 21st 2016.

The rapturous Melbourne based producer/ emcee has modelled his latest works around his earliest Hip Hop, Rap and R&B influences, many being from the early 90’s. With production styles that recognise artists of the 70’s and 80’s, in a time when musician’s recorded/ produced and mixed their albums, utilising their own skills. Which is precisely what Bastian has done with his latest masterpiece ‘Golly Gosh’ entirely produced by himself.

“I have produced all my other albums, to an extent, but have always got to a point where I have needed help from others to complete the project. This time around I have placed a lot of importance on the album belonging to me, I believe it is my most lyrical and personal work to date. After many painstaking months of hard work, I think it’s paid off”. – B. K

From the inspiration of intrigue and true artistry, come the untold workings of Hip Hop enthusiast and architect, Bastian Killjoy.

Album available through – Bandcamp, iTunes and all other reputable outlets

As the production of my album ‘Golly Gosh’ winds up, and I come to the surface to take a breath. I have come to the realisation that I haven’t shared any new music with you this year. As you may have seen last week, I shared an album teaser trailer (Watch here). Now I am proud to share with you my debut single from this release ‘Creep’!

‘Creep’ serves as a footnote to the rest of ‘Golly Gosh’. As an illustration of how the creative process of making music has been rapidly changing for me, examining my place in the music industry, how I see things happening around me. And how money has a tendency to change people in the Hip Hop game.

This song delivers as an ode & reminder to thank and pay homage to those who have come before us. In particular I have made reference to a couple of my greatest inspirations  Ms Lauren Hill & TLC. Its not often I site other artists in my works, but this time I felt it was relevant.

I am eagerly waiting an album release date for ‘Golly Gosh’ but for now here’s something to warm your appetite.‘Creep’ is now available for download/ streaming via

Album will be available through – Rising Tide Records, Bandcamp, iTunes and all other reputable outlets. Album release date TBA 2016.

Did I hear new music?? Thats right! Just hours ago my latest music video for my latest single ‘The Voynich Manus‘ went live on Youtube! + streaming/ downloading here
I am really happy to be able to share this song & accompanying video with you. It feels like more than a year ago since I released my album ‘Sides Of Me‘, with your help, but it has only been 10 months since then. A lot has changed and evolved with my music and the creative process during this time. I’m not sure where I am heading, but it is certainly away from where I was before and that means growth.

‘The Voynich Manus’ is really an interpretive piece on today, 2015. the things happening around us, our reactions, your reaction. How we see the world and how the world might see us back, on a level we often undermine and neglect, on a mindful level. What do we really know about who we are in proportion to the whole/ and that is why I called this song The Voynich Manus(cript). I hope people will find understanding in my intentions and put meaning to my madness. If not, the tune is pretty fly.

You can stream or download ‘The Voynich Manus’ for free HERE. I will have more details on my forthcoming album as we head over to the new year. Wishing you all a very happy and safe holiday season!
BAS 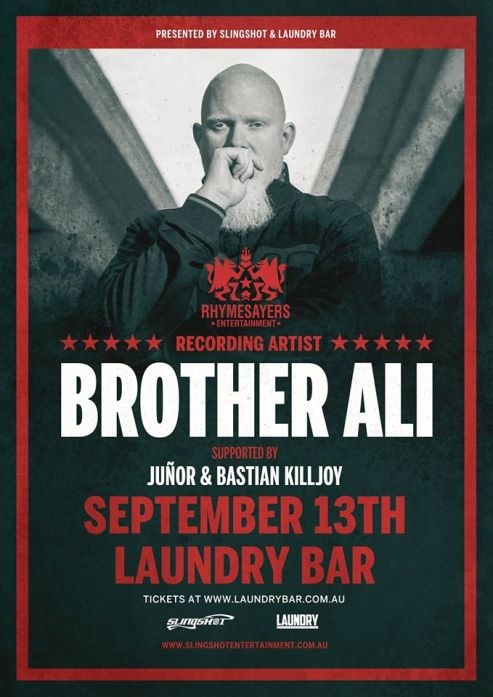 I am proud to announce that I will be supporting Brother Ali for the Melbourne stint of his Australian tour this September! I am also pleased to announce that old friend/ DMC finalist DJ Rellik will be joining me on the decks for our set!

Never one to shy away from the world’s problems, Ali has won the hearts and minds of hip hop fans world wide with his intimate song writing, captivating live performances and outspoken stance on issues of justice and human dignity.

He’s been the subject of Al-Jazeera and NPR pieces and was a keynote speaker at this year’s Nobel Peace Prize Forum. He’s landed coveted press features such as Rolling Stone’s 40th anniversary “Artist to Watch” and Source Magazine’s “Hip Hop Quotables.”

Brother Ali’s latest album release ‘Mourning in America and Dreaming in Color’ is a politically charged album which aims to reawaken people at this time.

“This is not just a new album, but a new chapter. There’s a kind of democratic reawakening in people at this point in time. I was really looking to take these topics and really hit them hard. To try to open ears and hearts and invite people to take some action and feel empowered. To be engaged and take some agency and responsibility for what’s going on in the world.” Brother Ali.

More recently he dropped ‘Left in the Deck’ which is a collection of raw, grimy recordings made in basements and hotel rooms around the world produced entirely by Jake One.

For tickets to this event head to Laundry Bar’s Website

Tickets are selling fast so get in quick!